Semoga berkenan....God Bless Us
Posted by r@ntherxtra at 12:40 AM 7 comments:

Winner of My Maps Australia Awards 2008

Google is the sponsor of My Maps Australia Awards 2008 and I was one of the winners. I am now a happy owner of an iPod Touch as well as a cute waypoint trophy.
I'll try to find some time to upload a photo of the trophy and iPod Touch
Read the competition announcement: click here
See My Map titled Public Arts in Sydney: click here
View Public Arts in Sydney in a larger map
Thanks to Google and the judges for selecting My Map!
Posted by r@ntherxtra at 6:12 PM No comments:

Just learned from Life Rocks 2.0 that you can blog from within MS Word. This is a short post using the said method. Nice!

Don't know how to include the tags (the Insert Category button is grayed-out… well maybe soon I'll find out.

Posted by r@ntherxtra at 6:55 PM No comments: 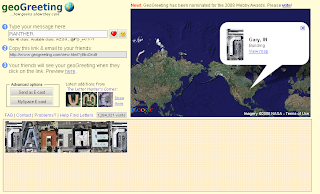 What this website does is allows you to type greetings and see them transformed into letter-shaped building with images from Google Map. See a screenshot of my nickname above.

You can send the greetings by E-card or send an email with the link generated.
Posted by r@ntherxtra at 4:19 PM No comments:

Email ThisBlogThis!Share to TwitterShare to FacebookShare to Pinterest
Labels: Fun

[Update] This post won the 3rd price in the World Vision Blog Action Day Competition. Thanks...http://learnaboutpoverty.org/]
[Update 2] Here is the link: http://learnaboutpoverty.org/2008/10/22/winners-learn-about-poverty-blog-action-day-competition/
I don't know about you but there is a different sensation when duty calls you to work in emergency situation post disasters man-made or natural. And wow...Indonesia has many of those disasters.


Post referendum violence in East Timor, Indonesia led to large exodus of East Timorese to West Timor. I have just graduated from my bachelor studies and joined OXFAM GB on a water project in a resettlement village.

Then came the bad news no one wanted to hear. Several UN staff were killed by angry mob of thousands in Atambua, Indonesia. All humanitarian organisation left the area as UN slapped the highest security level - Level 5 on the whole West Timor area. Fortunately after a few years later most NGOs returned. The UN however had a limited presence due to the Security Level restrictions. This is when I joined UN OCHA that facilitates coordination of humanitarian activities.

As a junior staff I went to natural disaster emergencies such as Alor Earthquake and Eruption of Mt. Egon in Flores. But the most shocking event that affected the whole nation and the world was coming soon. It was the Asian Tsunami Disaster on Boxing Day 2004. My experience in Aceh will be the theme of this post.

A couple of days after the large earthquake that led to the tsunami on Boxing Day 04, I received a call from the UN OCHA Chief of Staff in Jakarta requesting my support in Aceh. As a junior staff, it was a dream call plus the opportunity to help others in need during emergency...The adrenalin rush!

I arrived in Aceh on 6 January 2005, almost 2 weeks after the disaster. My main task was to support the United Nations Disaster Assessment and Coordination (UNDAC), usually the first UN team on the ground for any emergency. Our line of work is coordination. Although still could be considered a junior staff in the UN system, because I was the longest serving Indonesian field staff working with UNDAC I was considered as senior by my work colleagues. Another great thing was that I worked with some of the best UN staff from all over the world. How about working hours? 07:oo AM - 11:00 PM for 2 months....Crazy isn't it? But it felt good working under pressure. My main task was coordination with Indonesian Government and help establish the humanitarian air service -originally called UN-Joint Logistics Centre (JLC) and later UN-Humanitarian Air Service (HAS). I got to see and experience rides on different helicopters and planes.


And when you think the emergency phase is over and you can relax......boom in March a big earthquake shook Nias and Simeulue Islands. I am off to Simeulue to support the coordination activities and from what was originally a 1 week deployment turned into a total of 3 months posting. Living in tents once again together with survivors of the earthquake was nothing new.

After returning to Banda Aceh we hear the news about the appointment of Bill Clinton as the UN special envoy for tsunami recovery. He visited Aceh 4 times, 3 of them with the capacity as special envoy. I didn't realise preparing for his visit was a big job, a month of preparation for a half day visit.

By 2006 there was an opportunity to have a post with more responsibility in a small city called Calang. It was completely devastated during the tsunami and only 2 buildings were left standing. It turned out to be my most memorable moments in Aceh. I was trusted to become the head of the field office leading a small team of enthusiastic staff and to be trusted as the UN Deputy Area Security Coordinator for the Calang area (unofficially - mentioned in the UN Security Plan but no official appointment from the UN Country Representative) was a big deal for me.

After 2.5 years in Aceh, I decided it was time for me to leave...Fortunately a study opportunity arise with a scholarship from AusAID and here I am in Sydney.

BUT...when you thought there was no more emergency...one came up in the form of flooding in Aceh Tamiang. It happened during the Christmas holiday period. I was called up by the UN Coordinator to support as the Logistics Manager (where are all those fine UN WFP staff when you need them?) So as some people celebrated the Christmas Day....I was on a helicopter with a couple of tonnes of food supplies for the affected area. After a month in the disaster area it was time for me to leave as more staff have returned from their Christmas and New Year break.

I flew out of Aceh with great memories and experience. I enjoyed the adrenalin rush working in emergencies. Some people call us "disaster junkies" and there's even a Facebook Group. I will certainly do this type of work again in the future...

RANTHER is my nickname and welcome to my blog
I am currently based in Kupang, Indonesia. The majority of the contents of this blog is in English to help me practice my English.

By reading this code you should be able to find out who I really am (duh...what's the point, I hear you say - It's just for fun)